A dramatic panoramic image from the North Cascade Mountains.

This photo of the Wenatchee River valley and Tumwater Canyon filled with a lake of mist has been one of my most popular panoramic images. It is not a black and white image. As a metal print the image has great depth and shows the dramatic winter scenes so indicative of the North Cascades.

The 20×60 inch metal print titled “SnoCone” that is hanging in my gallery in Leavenworth WA is a visitor favorite. After the “Wow!” exclamation people are surprised to learn that the image is not a black and white. The deep greens of the trees barely reflecting light on this stark winter day and subtle blue hues reflecting from the snow patches become apparent with closer inspection. The stark and mystical nature of this photo, combined with these very subtle colors seem to captivate visitors to my gallery.

The first glimpse of the mist filled valley below was just a momentary break in the clouds that were swirling around me when I arrived at Snocone Peak.

Snocone peak is a popular winter destination for snowmobile riders in the Lake Wenatchee area of the North Cascade mountains. I took this photo from Snocone peak on my first snowmobile trip to this location.  It was a ‘shakedown’ run with the new snowmobile and I was trying to figure out how to pack my camera gear on the back of the snowmobile. As I crested the top of Snocone I caught a glimpse of the valley below. (see photo below) It was just a momentary peek at what eventually led to the above photo. With clouds and mist swirling, I could not see very much in my immediate surroundings, let alone the valley below. I decided to wait a bit and see if the scene would reappear. Just a few moments before I was going to give up, (it was a bit cold to be standing around in freezing mist) the clouds parted and I was treated to this spectacular scene. 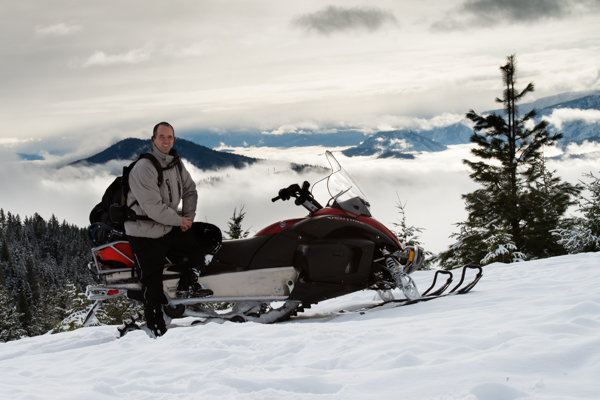 Eventually I was rewarded with a clear view of the mist filled Lake Wenatchee valley blow. After shooting the scene I had time for a self portrait.

Additional image information for those wishing to learn more about photography

Why I shot it the way I did – As you might be able to see in the self pic above with me sitting on the snowmobile the clouds in the valley below are a pretty flat wash of white.  I certainly did not want the clouds to be a wash of white… it was the swirling pillows of cloud and mist that made the scene so great, so that is what I focused on. If you want to capture the texture of clouds you need to tell your camera to ignore the rest of the scene and meter just the highlights of the clouds. So, with the meter set to ‘spot’ I aimed right into the heart of the clouds below, effectively telling the camera that the white clouds were not white at all… but rather grey. Now, with an exposure that effectively tells the camera to treat white as grey, the rest of the scene is going to be captured accordingly. The dark trees and mountains are going to drop almost to black and only the brightest highlights will come through as white.

The decision to crop the image to a panoramic format was due to focus the image on the dramatic scene in the valley. That was my subject and the flat high clouds and the tips of the small trees in the immediate foreground did nothing for the image… so they were cropped out. The result is a compelling image that focuses on the dramatic and stark beauty of the North Cascade Mountains.

RETURN TO THE LANDSCAPE PHOTOGRAPHY GALLERY